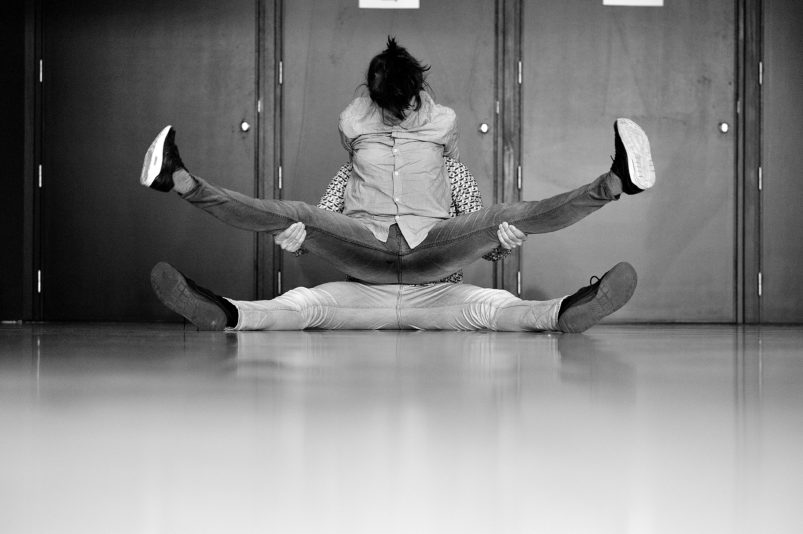 Felix Mathias Ott and Bahar Temiz will mediate some choreographic tools and body practices that they developed during the creation process of their duo piece C&P on Mars.  Their first physical encounter happened in the frame of a Russian martial art technique called systema. Some elements will be introduced in the workshop to prepare the body for the partnering material that they will propose. By using these tools, each couple will be able to create their own short duo score that they will share with the other participants. The couples will be formed formed during the workshop.

Felix Mathias Ott was born in 1983 in Reutlingen and is mainly choreographer in the field of contemporary performing arts, working internationally and based in Berlin. He studied first Stage-design later Contemporary Dance, Context, Choreography at HZT Berlin in cooperation with UdK und Ernst Busch Hochschule in Berlin. Since then he works as a stage designer, video artist, interpreter (dancing/acting), author and choreographer all over the world for his own creations or with artists like Krzysztof Warlikowski, Boris Charmatz, Yves Noel Genod, Maud le Pladec, Mathilde Monnier, Björn Melhus, Clement Layes, Tino Seghal.

Felix’ work tends to create reflexive, more than conceptual, spaces where the spectator is invited to discover the and his/her unconscious world, to call for his own creativity in order to recreate one world with the fragments that the surrealistic writing of the artist proposes to him. Within this, Felix Mathias Ott wants to create a silent dive from reality into fiction, which wishes to contrast our contemporary ways to receive information, and get influenced all over with screamed out manipulative slogans.
His personal creation and research is supported for the next few years by the European Apap art platform. His work is also supported by the City of Berlin and the Goethe Institut.

Born in Istanbul, Bahar Temiz studied philosophy at the Université de Paris IV-la Sorbonne, followed by studies in dance at the Artez Dance Academy (Netherlands) and choreography at Ex.e.r.ce (Centre Chorégraphique National de Montpellier). She holds a Masters degree in dance from Université de Paris VIII. She worked as a dancer and performer with Erik Kaiel, Willi Dorner, Dylan Newcomb, Superamas, Ivana Müller and is working with Clément Layes (The Eternal Return) and Marc Vanrunxt (White on White). She is assisting theatre projects and leading workshops inspired by different energy-psychology methods. While dealing with groups, she is interested in the concept of Game Theory in order to propose different models of conflict and cooperation in which participants, as intelligent rational decision-makers, could develop individual strategies to move as a group without leadership. Her own work focuses on inviting the viewer to investigate ones own narrative participation into the image making process. Her work has been presented in Austria, Belgium, Germany, Netherlands, Sweden and Turkey. She is currently collaborating with Felix Mathias Ott on C&P on Mars and developing her own projects.